Castel Sant’Angelo or originally the Mausoleum of Hadrian is one of the best-preserved ancient buildings in Rome. It was initially built to serve as a mausoleum for the Roman emperor Hadrian and his family. A legend says that Archangel Michael appeared on its top to one of the popes. To commemorate this, the mausoleum was renamed to ‘Castel Sant’Angelo’. Later through ages, Castle St. Angelo was utilized by popes as their proper castle (as well as a prison) also serving for defense purposes. A secret passage was constructed to link it with the Vatican and facilitate escape when necessary. As in the case of other Roman buildings, some building elements and artwork used in its original decoration were taken to be used at Saint Peter’s. 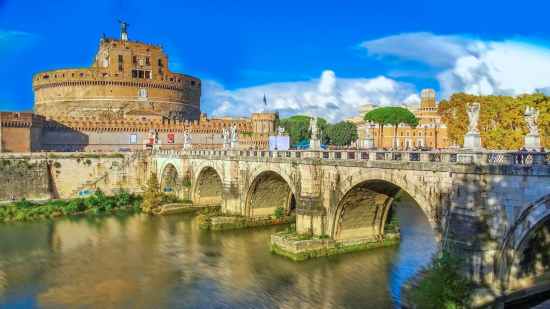 The Sant’Angelo bridge that leads directly to the castle was built in ancient times as well. Today it is a pedestrian zone. Its current design with ten statues of angels is of Gian Lorenzo Bernini. Bernini managed to finish; however, only two of the ten sculptures. The remaining angels are works of other sculptors. (Photo by Pexels)

St. Michael or Archangel Michael is a figure recognized in several religious systems. In Christianity, he is one of the archangels (usually three or seven, depending on the religion), probably the most important one. He is often presented with a sword for he is the commander of God’s army. Sometimes, he holds a balance for he is the one who decides a person’s fate after death, sending them to heaven or hell. In the early ages, the archangel was told to appear to people (important people) and ask them to build churches or monasteries in his name. Mount St. Michel in the French Normandy is another prominent example. On the picture right, a statue of Archangel Michael located on top of yet another famous church in Europe – the Sacre Coeur Basilica in Paris.