It is getting colder and colder. The winter is coming on Earth. The Goddess Demeter is once again losing her daughter Persephone to Hades. It is, however, not Westeros, but ancient Greece.

This post was supposed to be about Bernini, the famous Italian sculptor. He was mentioned lately in Angels and Demons movie where a symbolist was following the path of illumination marked by Bernini sculptures to rescue kidnapped cardinals. While looking through photos, I made last year in Rome, I found a Bernini sculpture, a very famous one, that made me think of winter that is coming. The statue is known as the “Rape of Persephone” and can be admired in Galleria Borghese in Rome (>>>). The association with winter may seem far-fetched, but it isn’t. 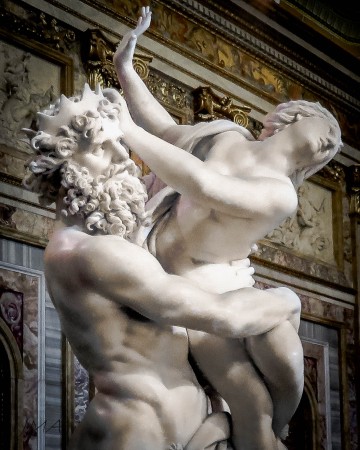 In ancient Greek mythology, Persephone was the daughter of Zeus and his sister Demeter the Goddess of fertility. One day Hades, brother to both Zeus and Demeter and God to the Underworld kidnapped Persephone and took her to his realm. According to some writers she was already in love with her uncle. The act was not that dramatic as it was reflected by Bernini.

But her mother Demeter almost lost her mind looking for her. As the Goddess of fertility, she was no longer taking care of the Earth. The harsh times came on people. To help people Zeus, the king of gods, ordered Hades to release Persephone to her mother for some time each year.

Each time Persephone is coming back to her husband to the Underworld, leaving her mother, the autumn and winter are embracing the Earth. After half a year she comes back to her mother onto Earth. With gratitude, Demeter is then taking care of people bringing them spring.