Longing for the Summer sun, I found photos made some time ago in the French Normandy. The August heat was all around us. On that day, we found ourselves in the right place at the right time traveling and enjoying the summer. In closed town areas, the heat was unbearable. But we were on the Atlantic coast. From time to time, a fresh cool breeze was giving us some soothing comfort.

We left Rouen, the cradle of the Norman culture >>> and took the way West to reach the Atlantic coast (the English Channel to be precise). The preceding evening we spent in a fine restaurant at the Rouen main square, the same place wherein 1431 Joan of Arc, the french national hero, was burned at stake. The site looked not very appealing to me, as, in its midst, there is a church not suiting really the surrounding architecture. But the city is absolutely worthwhile. 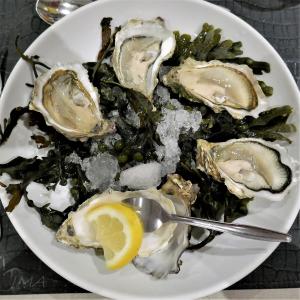 Our dinner was, however, exquisite. I have no memory of what I took for the second and third courses. But for the first course, I used the opportunity of being in France to order oysters. Funny, but on that day, I was sitting at the same table with a lady, who around twenty years ago, made me (in the true meaning of that word!) taste oysters the first time in my life. I learned to enjoy them in the meantime. But the first time it was like closing my eyes, eat an oyster, and as quickly as possible, drink a glass of white wine. As I can recall, it was somewhere in Southern France, in a small fishermen village. The oysters were freshly caught. The advantage the French have over many other locations in Europe.

The morning was a leisurely one. After the morning coffee, which I enjoyed still in bed in my hotel room, and the French way breakfast (means: a croissant, some marmalade, yet another coffee, and orange juice) in the hotel restaurant, we hit the road around 8 maybe 8.30 am. So, well-rested in a good mood, we were ready for whatever the new day was all about. Our plan was very ambitious. The next day we were supposed to visit Mont Saint Michel Abbey >>>, one of the most distinct French tourist attractions. We needed to be there as early as it can be to enter the abbey with still not many other tourists around us. We decided to spend the night in a small town of Saint-Hilaire-du-Harcouët located less than thirty km from Mont St. Michel. We were supposed to be there around 8 pm, to enjoy yet another French-style dinner in the evening with a reservation already made. Before we get there we were to reach the coast and visit three locations: Etretat beach with its famous chalk cliffs,  Honfleur, a historic old port serving today mainly as a tourist attraction as well as the beach of Arromanches, a location of D-Day battles that also for several months served the allied forces as a military harbour >>>. The day was more about sightseeing than sunbathing. 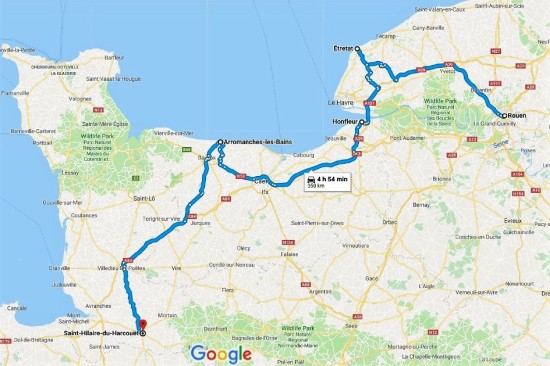 In Etretat, we gave us only two hours to enjoy the views. As we got there, only after around one hour’s drive, it was still before noon. The Sun was still low. Making photos was easy. Because of the short time planning almost constantly I checked my watch, mainly as I started to climb the cliffs. But as distances there are quite huge, I did not manage to reach any of the higher spots. But already from the middle ground, the panorama looks excellent. It was one of those mornings, I enjoyed the place I was and made some beautiful photos easily.

The Etretat beach seems to be a perfect spot for those, who besides a short stay on a beach, would like to spend a day on walking, climbing up and down hills, sightseeing and making beautiful photos. There is the sea, the boats, the green hills, and the white chalk cliffs. 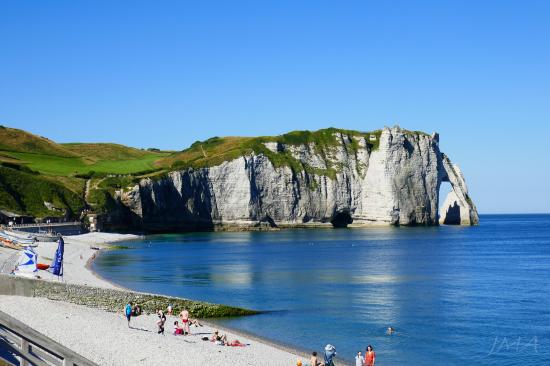 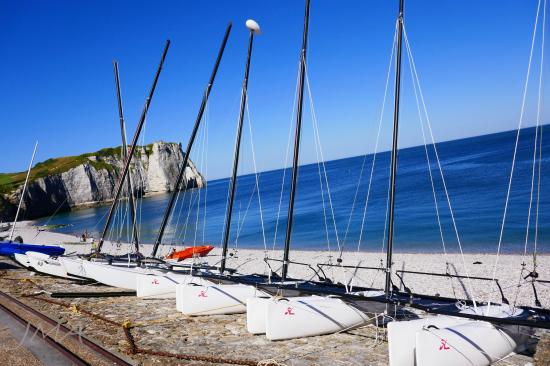 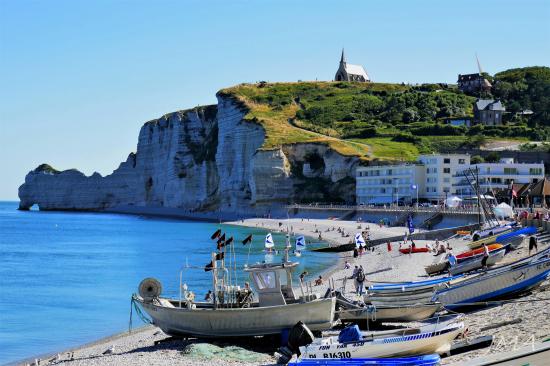 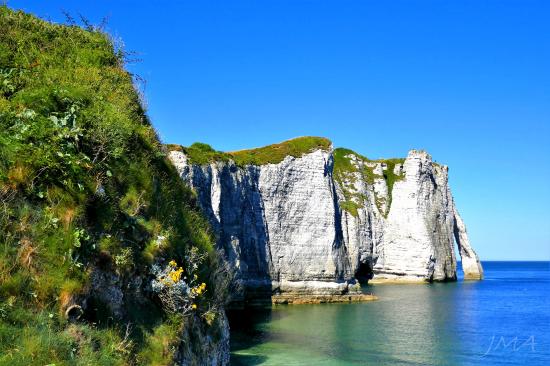 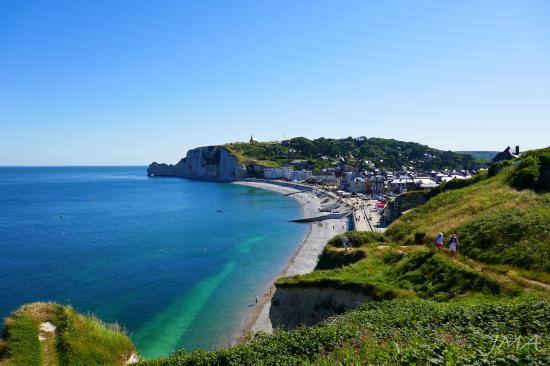 The last view is from half-height of the hill that leads to the cliff on the first photo. 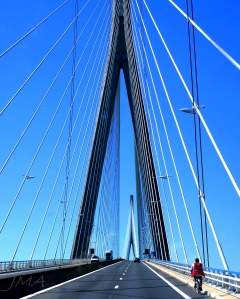 Our next stop was Honfleur, located at the estuary of Seine (the river that among other cities crosses Paris). Honfleur was through ages an important maritime and inland waterway port. It was the gate to the sea for the French capital. Today it lost its position to le Havre, which is after Marseilles, the second biggest maritime port in France. It is located at the opposite bank of the river and the estuary. On our approach to Honfleur, we had to pass a bridge over the Seine high enough to give passage to inland waterway ships. The height allowed us to see parts of the Le Havre port complex.

The old port of Honfleur was converted into a marina. It is of a square shape and surrounded by old buildings that, in the past, were both docks and a housing area. Naturally, today, the ground floors and the quays were converted into restaurants and gift shops. So the place seemed to be ideal for sitting down and enjoy lunch in the old port scenery. As the city was thriving through many ages, the buildings surrounding the marina are centuries old. I was feeling there a bit like on a pirate movie set. I remember, one of our group, a traveler who saw many different locations in the world while looking the first time on the old port bay noticed out loud: ‘I feel like in Norway or Denmark’. Walking the streets of Honfleur, and later visiting its main church, I also felt the Scandinavian connection. Having in mind that Normandy was ages ago seized by Vikings, who then melted with the local francophone society, there is some apparent reason behind this association. 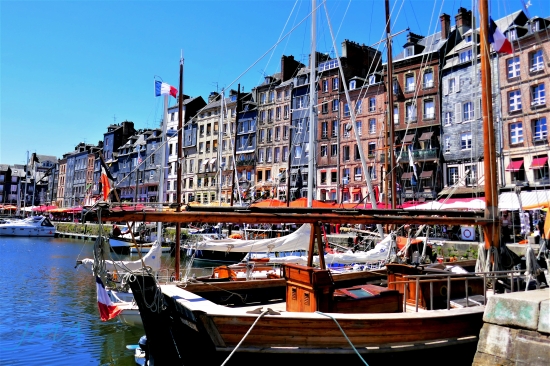 The old port and the marina as we approached it. 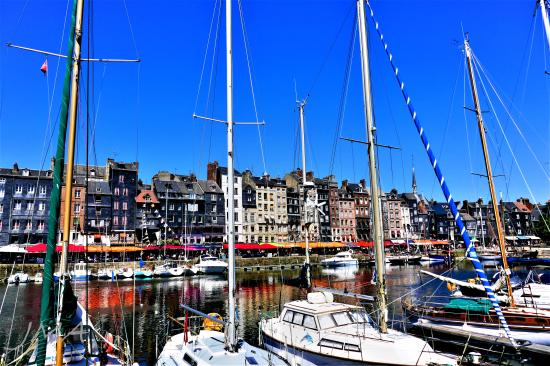 The view from the opposite corner on the same buildings. 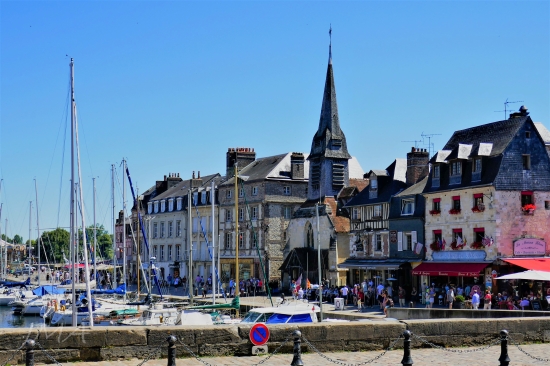 The opposite side of the port and the marina.

All Norman and Breton historical cities are full of original or carefully reconstructed old streets and houses. Many of the houses are built according to the traditional (for Western Europe) half-timbered technique >>>). Walking the streets in the old port area (behind the small church on the picture above), you can find truly old and well-preserved buildings. We spent there three or four hours, including a lunch break. It was scorching. I was not really hungry. So, instead of sitting down and stay stationary for an hour or so, I left my company to sightsee yet again. We were there in the early afternoon hours. The sun was straight above us. But with all those views discovering the old streets and making shots against the sun with the old buildings in the front was really fun. 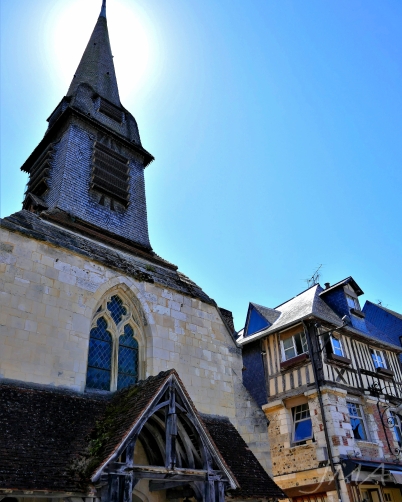 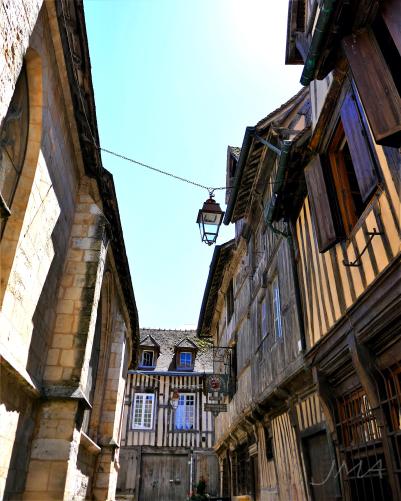 Honfleur is famous for yet another impressive old building, which is the church of Saint Catherine of Alexandria. The main church parts that are two parallel naves were built one after another in the XV and XVI centuries, respectively. The church is of wood and belongs to one of the most significant wooden constructions of that kind in France. The bell tower is a separate building planned so to decrease the risk of fire to the church in the case as the tower would be stroke by lightning. 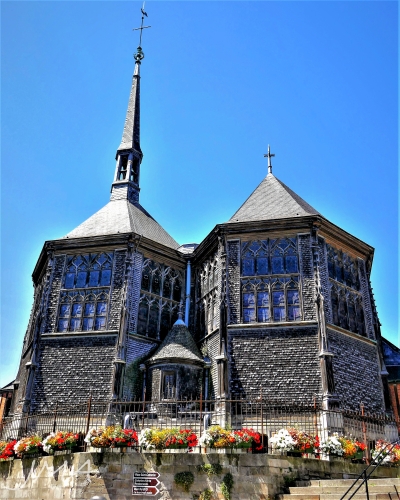 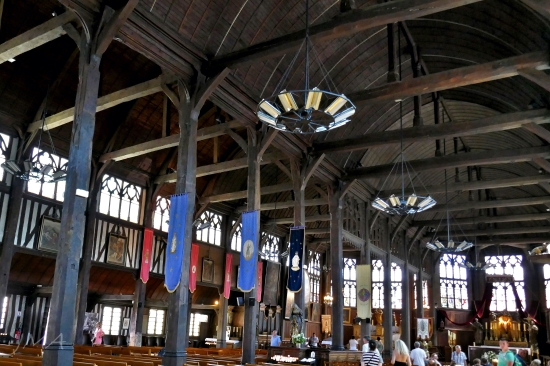 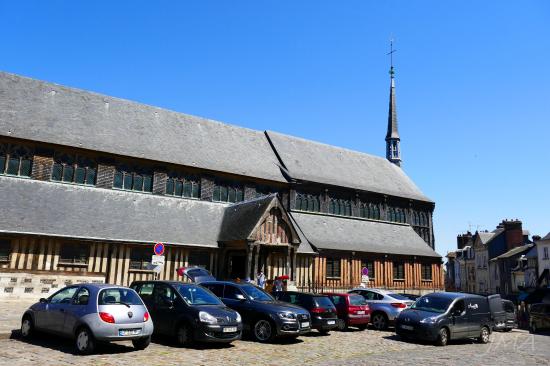 The church is located just behind the old port, with the bell tower on the opposite side. 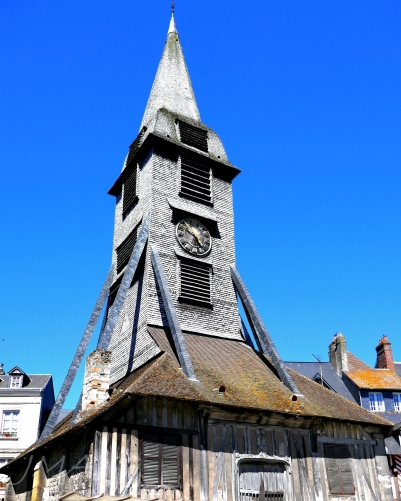 In recent years the city authorities restored the main dock of the old port. It is difficult not to notice it, as it looks like … new. But still, we can admire the old kind of Norman architecture. 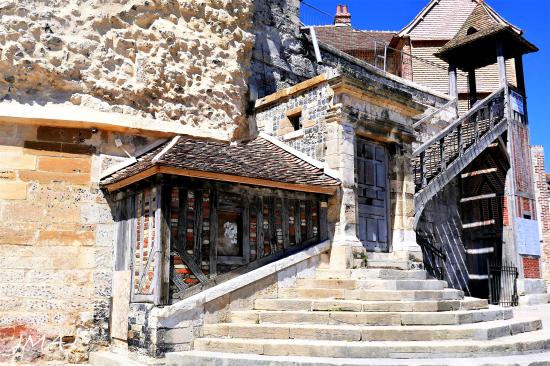 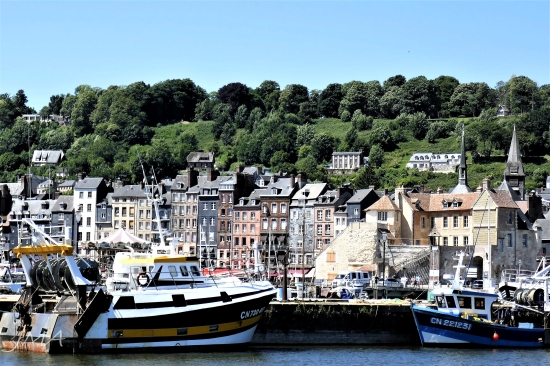 The view from behind a channel where still bigger ships than yachts are allowed to with a view onto the restored old dock building and behind the church of Saint Catherine (on the right).