Ancient Rome was originally a kingdom. It emerged as an Italic tribe called the Latins with roots in the central regions of the Italian peninsula started to dominate over other tribes living there. The first king was the legendary Romulus. He set up Rome (the city was named after him) VIII BC on the Palatine hill. Palatine hill is the central hill of all seven hills, on which Rome is located. The legend says that seven kings were ruling the Roman Kingdom, till it converted to a Republic (VI BC). This cannot be however confirmed as a stated fact, as the Gauls who once seized fully the city burned all the annals. The kings were elected kings with absolute power. 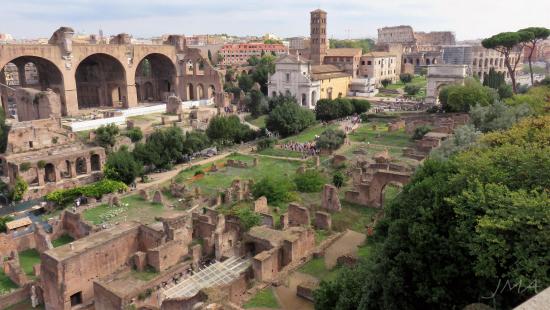 A view onto the Roman Forum, the very heart of the Roman Empire (>>>). Seen from the Palatine Hill.

Later on, the country was converted into the Roman Republic. Each year two consuls were elected to govern the city. The people of Rome also had their say, through the Senate, various assemblies and councils. In harsh times, it was, however, possible to nominate a dictator. Julius Caesar, who as the military commander, expanded the Roman influence throughout Europe and North Africa was appointed a dictator in perpetuity. After his death (>>>) the Roman Empire was formed, with emperors as heads of state. It was, in fact, Caesar’s adopted son Octavian Augustus, who became the first Roman emperor (I BC).

The Empire expanded further from Britain in North-Western Europe, through the lands around the Mediterranean Sea reaching to the Middle East. It was so big, and so many nations were conquered that it turned to not be possible to govern it from one place. So part of the city of Rome’s influence over the Empire went to Byzantium (later Constantinople, today Istanbul). For some time, there were two parallel imperial courts in the Roman Empire – one in Rome (western part) and one in Byzantium (eastern part). Rome lost its influence over the Empire to Byzantium (Constantinople) around 500 AD, and around 800 AD it finally lost its power over western parts of Europe to Franks with Charlemagne at the throne (>>>).