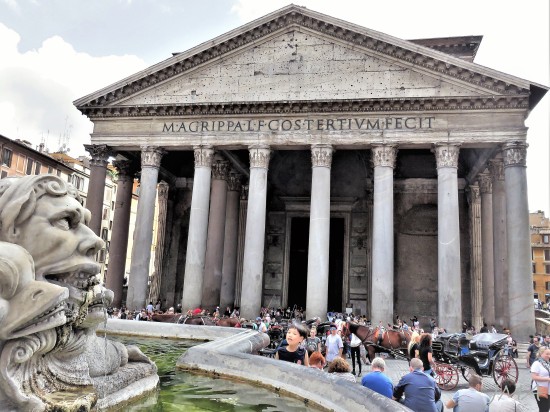 The Pantheon, Rome. At its front, sixteen Corinthian columns ‘made in Egypt’ and transported hundreds of miles to Rome, ancient Rome …

The original Pantheon of Rome was built 27-25 BC by the consul Marcus Vipsanius Agrippa. According to Roman mythology, it stands on the spot, where Romulus was carried away by an eagle after he died. The original building was however destroyed by fire in 80 AD. It was the emperor Hadrian, who reconstructed the Pantheon in 118-125 AD giving it a new design. Historians say he was so obsessed with the new interior design that he punished by death the principal architect after a dispute over some technicalities.

After the reconstruction, only the original portico with sixteen Corinthian columns was preserved. As a tribute to the consul Agrippa, an inscription was added at the top saying: M.AGRIPPA.L.F.COS.TERTIUM.FECIT, otherwise: “M[arcus] Agrippa L[ucii] f[ilius] co[n]s[ul] tertium fecit”. It means: “Marcus Agrippa son of Lucius consul for the 3rd time built this”.

The massive Corinthian columns supporting the portico are each 12 m tall and 1.5 m in diameter. The column shafts are of granite monoliths that were excavated from two Egyptian quarries. The eight original light grey columns of the front row came from the imperial quarry at Mons Claudianus. The pink column shafts (called pink Aswan) of the middle and back rows came from the Assuan region. They were first dragged many kilometers from the quarries to the Nile river on wooden sleds. Afterward, they were floated by barge down the river when the water level was high enough during the spring floods. Finally, they were brought by ship from Egypt to the Roman port of Ostia and further pulled up the Tiber river to Rome on barges. Quite a challenge having in mind that each of the columns weights around sixty tonnes.

As you may, however, notice on the photo, not all columns in the front row are light grey. In the Middle Ages, the left side of the portico was damaged. Three columns had to be replaced. Another challenge. Finally, one replacement came from Villa of Domitian at Castel Gandolfo (its remains belong today to the Papal estate) in 1626 AD. The other two came from the Baths of Nero (Rome, no longer existent) in 1666 AD.