One of the first Japanese words you learn, while visiting a shrine or monastery is torii (nouns in Japanese are used only in the singular form). Torii is a Japanese kind of symbolic gate marking the line, at which you trespass from the profane to the sacred ground. It is usually placed at an entrance to a Shinto shrine. We saw, however, torii in some of the Buddhist temples, as well. In more prominent shrines or monasteries, you will also find gates that mark the sacred ground that you recognize as a gate. But its construction is by far not like on the photo below. These are really solid and quite big gates. Similar symbolic gates may also be found in other Asian countries.

Torii, in general, is made of two pillars and two horizontal bars. The construction may be, however, more complicated or a simpler one. A very simple torii may be made of only two posts linked with a rope (called shimenawa). Shimenawa may also be an addition to the traditional construction (as on the photo above). Torii may be made of wood, or stone, or concrete, or other materials. The most distinctive ones are those made of wood and painted with a red or orange tint (vermilion). Only some parts of a torii like footing and/or the upper lintel are painted black.

Torii, as well as other buildings in Shinto shrines or in Buddhist temples, are often (by far these are however not all of them) covered with red (orange) tint called vermilion. This kind of tint contains mercury (mercuric sulfides), the size of which particles is decisive for the color. The bigger the particles, the more reddish the tint. The tint is said to protect the wood against insects, but this is not confirmed by all sources. The protection may be somewhat symbolic as the red color is told to protect against demons and illness. The symbolism is pretty much the same as of orange (red) clothing put on figures (statues).

There can be a couple or quite many of torii gates in a shrine. They can be of different sizes. Each torii may mark the trespassing point to the following another sacred space.

Torii may also play a different role. In Fushimi Inari Taisha shrine complex in Kyoto (called shorter Oinarisan >>>) torii are placed one after another forming long but long corridors. Walking beneath you feel like being in a tunnel. The torii in Oinarisan do not mark the sacred land. They had been offered to its deity by worshipers as a thank you for good fortune. 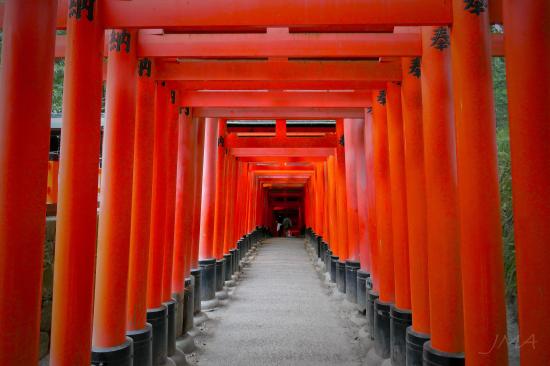 Vermilion torii path, one of many in Fushimi Inari Taisha shrine complex, Kyoto.

Another photo made in Fushimi Inari Taisha. Behind a stone, a torii that marks the entrance to the next section of the sacred land. You can see small vermilion torii that had been offered as a gesture of gratitude, like that big torii on the photo above.