Bretagne or in English Brittany is a part of the French Republic. Traditionally, from the beginning of the second millennium, it was inhabited by Britons (Celts) that fled from the British islands. So, it was sometimes called Little or Lesser Britain.

We spent there a couple of days this summer. To sum up my first sight impressions, I have chosen five photos that as to my recollection reflect that what we saw. 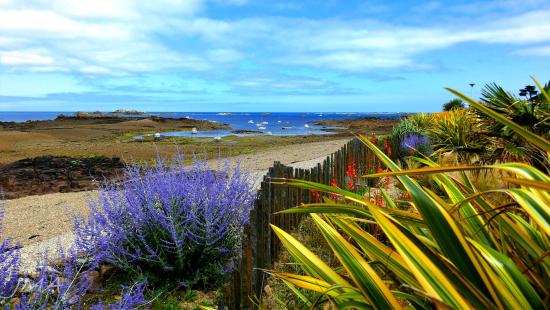 Beautiful landscapes, especially those at the English Channel and beneath at the Atlantic coast. (see also: the rocks of Quiberon >>>) The Atlantic coast is once at low at high water. If you look closely at the picture, you can see that some of the boats are actually laying on the ground. The photo was simply taken at the low tide.  In the left-low corner, lavender flowers widespread in the country. 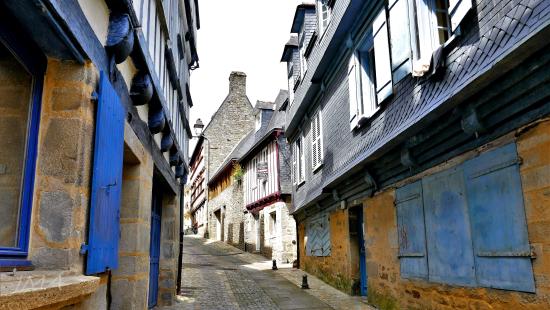 The streets of old towns are a mixture of different architecture styles, sometimes well preserved from the past, sometimes rebuilt after fires or war damage. On the picture you can see three main characteristics: the grey sandstone bricks, the slate roofs that sometimes cover also part of facades at upper floors (it is typical for France, compare pictures below), as well as half-timbered walls with timber frames painted mostly in blue, red and green (popular in the past in many European countries).

The greenery. On the picture hortensias at the rock walls. Those on the picture are relatively small. (They can grow two-meter high.) Although native in Asia (this year we saw them in many Japanese gardens) they are widespread also in Europe. Another popular plant we saw in many places was lavender-type flowers you can see in the first picture in the lower-left corner. 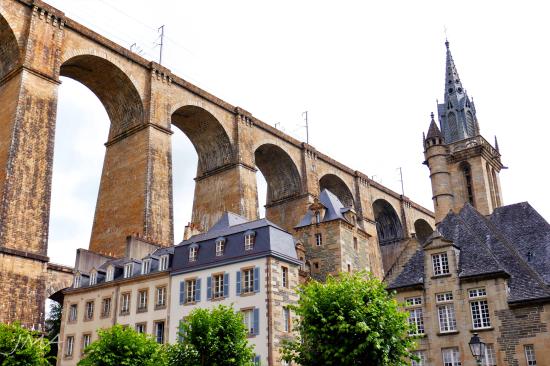 The railway viaduct in Morlaix, an arch bridge built 1963. Below houses in style typical for Bretagne and for France. Compare slate roofs of different kinds.

Boats at the low tide and architecture the same style you saw on the above pictures. We visited several small towns. The photos were taken at different spots, but if you combine them, you can imagine how the cities in Bretagne look like (at least from the tourist perspective).