Traveling to Japan, you visit many Shinto and Buddhist temples. For a person from a totally different cultural and religious background, not even counting in the language barrier, the artifacts one founds or rituals one sees there are barely understandable.

When I decided to take a trip to Japan, my knowledge of this country was limited. Neither I had time for any preparation. As the trip was organized by two colleagues of mine, one of which was a graduate in Japanese culture, I entirely relied on them. Only after coming back home, having in mind the observations and hundreds of photos I made in Japan, I started to dig the internet on additional information. Today, a bit longer than a year after we came back, with more than twenty posts on Japan, including a more extended summary on shrines and temples >>>) I finally got to the memories and pictures from Koyasan. While on the spot, I knew only we are on some kind of a sanctuary mountain and came there to spend a night in a temple.

Koyasan, otherwise called Mount Koya, is the main seat of the Shingon sect, one of the most important Buddhist sects in Japan. The place is visited by both Japanese pilgrims and foreign tourists, who usually stay there overnight to experience a Buddhist temple lodging (called shukubo in Japanese). Besides some sightseeing in the Mount Koya temple complex and the surrounding town, the other obligatory stop is the Okunoin temple and the Okunoin cemetery.

The Okunoin temple is, in fact, a mausoleum of Kōbō-Daishi, also called Kūkai (774–835), the Japanese monk who was the founder of the Shingon sect. He was the one who decided to locate the sect’s main seat on Mount Koya. For more than a thousand years, people from all over Japan chose the neighborhood of his mausoleum as their burial site. Today, with more than 200,000 graves (tombstones), it is the largest cemetery in Japan.

One of the entrances to the cemetery. Going at a slow pace, taking short rounds, and making photos took us around forty minutes to reach the mausoleum. If taken straight, the one km route can be, of course, done in a shorter time. But it is better to plan in more time to sightsee the cemetery.

A couple of times, we met monks dressed in the traditional way that was, of course, not that unusual in the whole Koyasan area, for there are more than two hundred small temples located on the mountain.

On the way to the mausoleum, we crossed some newer parts of the cemetery with tombs often decorated with names of famous Japanese corporations. Because of the language barrier, I did not understand whether this was tombs of people important to those companies or the tombs played some other role. Maybe the companies simply sponsored the graves. Still, from the European perspective, it was a bit unusual. 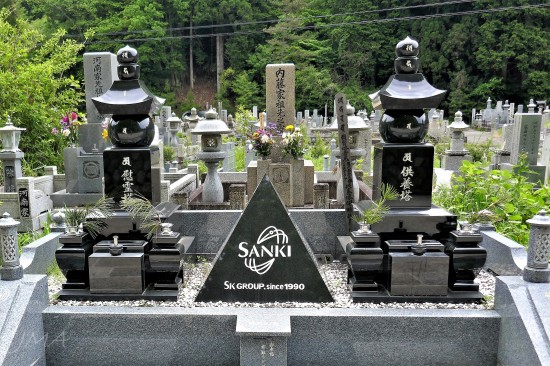 Sometime later, we got to the older parts of the cemetery. The most tombstones and graveyards were left as they were for years (or hundred years) with moss all around them. The views are complemented by the very tall and imposing old cedar trees.

Some statues were covered with vermilion (red/orange) clothing to protect them and the dead. Bottles of water or soda cans to provide for the dead were left on some graves, as well.

Below some photo impressions from the Okunoin cemetery oldest parts. 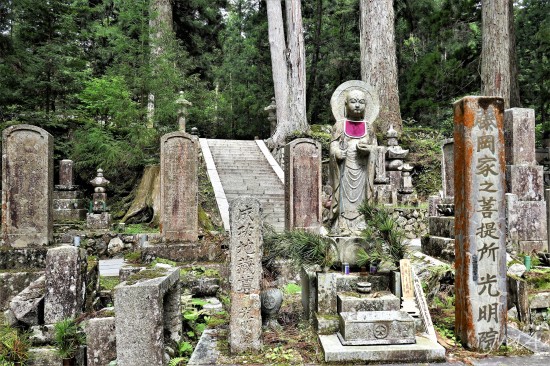 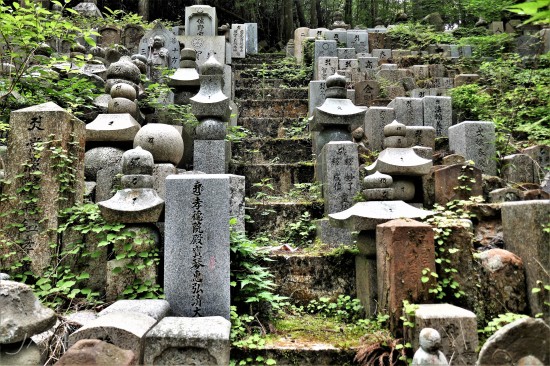 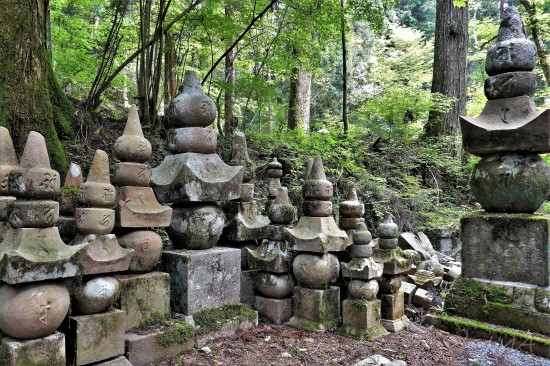 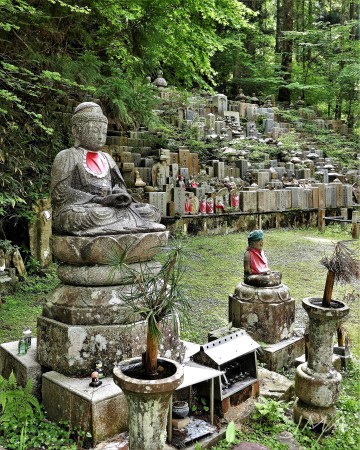 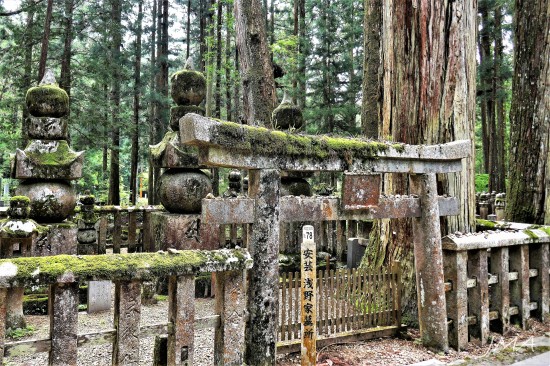 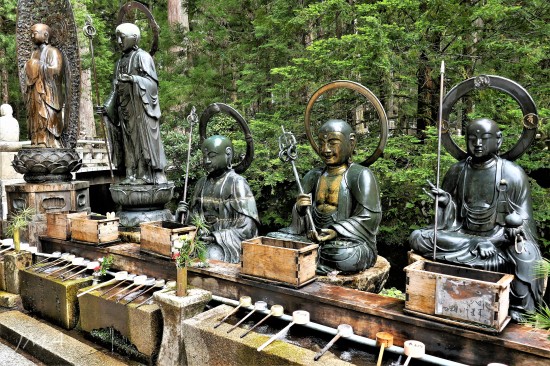 And finally, we got to a place with plenty of statues and water sinks where you can perform the purifying rituals. From this place on, behind a small bridge, and photography was forbidden. We were supposed to enter the sacred ground of the Kūkai mausoleum.

This was not the first time for us as in a Buddhist sanctuary, we had to obey strict rules. In fact, in all cores of a Buddhist temple, the photography is forbidden. So I can rely only on my memory. The interior of the wooden structure was huge. Besides of candlelight, it was dark inside. In fact, you saw it when each time somebody opened the entrance doors. You felt incense. The interior was full of figures, some of them were golden ones. There were many flowers all around. And a couple of monks were either tidying up or performing rituals.