Some time ago during a visit in Musei Vaticani (>>>) in the second hour of a slow walk in the crowd, I was simply too tired to admire that what we saw. The Museum is totally overwhelming as far as the number of artifacts, artworks as well as handicrafts all around are concerned. There were moments I made photos just to be able to follow the route quietly later at home. My neck was tense because of the constant looking up onto the frescoes and other ceiling decorations. To be frank, I did not prepare earlier for this visit, so I had no idea what was still ahead of us. For a couple of minutes, we entered an enormous hall with frescoes all around. I did not want to speculate on its size, but this was altogether hundreds of meters. Then there was another room and another. You could have only looked around, stopping for a while, and catching the momentum.

We entered the so-called Raphael’s Rooms, a series of chambers decorated by the Italian Renaissance master Raphael, or his pupils. In fact, the sightseeing route begins in the reverse order. It starts in the Room of Constantine, a great hall designed for reception and official ceremony purposes. The frescoes are not by Raphael himself. Raphael died before he was able to finish them. The work was completed by artists, who worked in his workshop, upon the original Raphael’s design. The room is devoted to the Roman emperor Constantine, who was the first Christian Emperor of ancient Rome.

Only a small fraction of a wall fresco in the Room of Constantine, showing the Battle of Constantine against Maxentius, painted by Raphael’s pupil Julio Romano.

Later on, we visited a series of smaller chambers that had been designed to serve as the pope’s private chambers that are told to be painted by Raphael himself. This can be, however, not entirely true, as Raphael is said to have maintained one of the most significant workshops in Rome. Translated into English, it means that he employed many talented people who did auxiliary work for him.

Raphael or Raffaello Sanzio da Urbino (1483-1520), was one of the greatest artists of the Italian Renaissance (alongside Michelangelo and Leonardo da Vinci). He is one of those artists who died young but left immense art heritage.  Raphael’s Rooms are told to be one of his greatest achievements. On the picture left, you can see Raphael’s self-portrait on display in the Louvre collection in Paris.  But artists sometimes painted their self-portraits inside works for which they have been commissioned. One of them (supposedly) is in Raphael’s Rooms on the wall with a fresco depicting the School of Athens (>>>). In the middle of it, there are two masterminds of the ancient times: Plato (to the left) and his pupil Aristotle (to the right). The head of Plato is a portrait of Leonardo da Vinci, and that of Aristotle is indeed Raphael’s self-portrait. 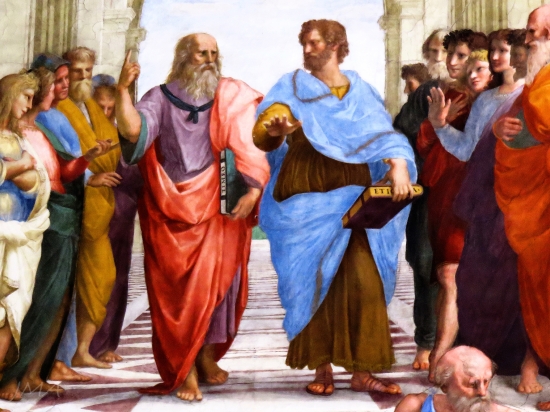 Raphael’s Rooms are decorated with frescoes all around. You can admire paintings on each wall and on all ceilings. Because of the crowds, I made only a few photos directing my camera up from above people’s heads. However, on the Musei Vaticani web page, we can admire the empty Raphael’s rooms on pictures and in the form of the virtual tour (>>>).

Below some other photo impressions. 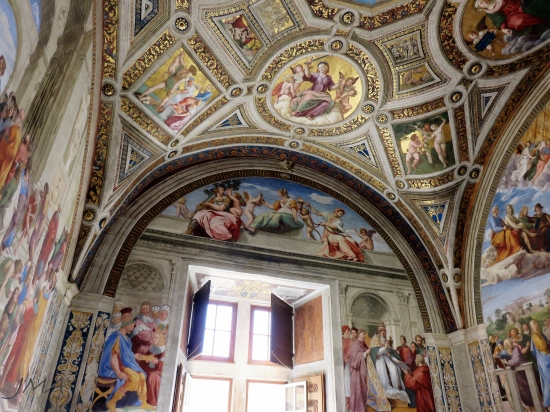 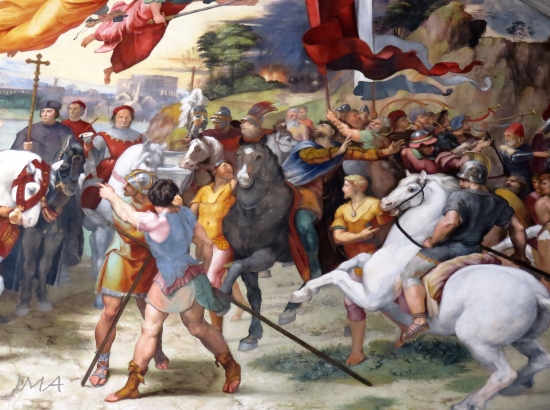